Sinistar: the arcade of the eternal youth

Torres Quevedo and the first computer

(originally published in Spanish in November 2018)

I am in the middle of intensive reading up on the inventions of Leonardo Torres Quevedo, and, even though is a bit early, I would like to share my findings, especially those related with the world of computing. Additionally, I am Spanish and I talk all the time about pioneers of Electronics and Computing born or that lived in U.S.A., Japan, etc., and I think that it is not a bad idea to look for the national heroes now and then. Not pretending to underestimate anyone, I believe that there is a clear americanization of the history of computing, so instead of letting the information to find you, one has to make a special effort to look for it.

I start this research due to my interest in a line of computation that the general public assummes wrongly: computer (digital systems) commit mathematical errors when performing calculations. The main problem is that the number of digits that a computer uses to store a number is finite, thus, not all numeric values can be represented correctly, and this leads to operations’ results with errors, which are propagated if these are used in other operations. It is at this point where I connect with Torres Quevedo, since I read somewhere that he was a pioneer proposing one of the arithmetic formats most used in modern computers at the beginning of the XX century.  “But that is another story and shall be told another time”, not so long.

This time I focus on something big: Torres Quevedo, a Spanish engineer, implemented the first computer in history.

Searching the IEEE and ACM databases yielded only a few articles: [Randell82][Yuste2005][Yuste2008]… I found a few Spanish books tackling this issue, some of them discontinued and others just passing through this issue or with incomplete information about it.  Randell deals with Torres Quevedo’s invention in his book “Origins of Digital Computers” (Springer, 1982),  but I did not have the oportunity to read it. There is a book about Torres Quevedo’s legacy by Alfonso Hernando González which is available online (check below). I have used the article by Randell [Randell82] as a starting point to traverse this path, along with the works of Hernando [Hernando1991] and the articles of Yuste et al [Yuste2005, Yuste2008].

Leonardo Torres Quevedo was born on the 28 of December of 1852 in Santa Cruz (Cantabria, Spain). He studied Civil Engineering (Ingeniería de Caminos, Canales y Puertos) and his profesional carreer was full of achivements. He worked on different disciplines such as Aeronautics, Automatics, Telecommunications and Mechanics.  His inventions cover from analog computing machines, along with remote radio controlled systems, to the design and fabrication of semi-rigid planes that were used in the First World War. His “Spanish Aero Car” is still fully functional in Niagara’s Falls. He also was quite productive designing computing devices and automata. 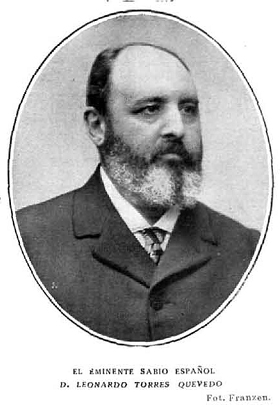 His famous Chess Player, considered the first chess automaton,  was able to carry out the king and rooke endgame, playing – and winning—against a human opponent. It is possible to check its design in the publication Le Nature de 1914 [Vigneron1914].

He was keen on exploring the possibilities offered by electromechanic systems and to test the limits of machines. In his work Essays on Automatics (Ensayos sobre automática) [Torres1914] he elaborate on the work of Babbage, who was the first to propose the construction of machines able not only to perform mathematical operations, but also to execute a program.  The Analytical Engine was conceived to be entirely mechanical, was able to store data (as the registers in a CPU do), had arithmetic operators such as adders, multipliers and dividers (equivalent to the Arithmetic-Logic Unit (ALU) of a CPU) and its programs accounted for loops and decision making (conditional branches). Ada Lovelace stands out as the first programmer since she, inspired by Babagge work, wrote the first programs that could be run on a machine, even though neither her nor Babagge would seen the analytical engine built.  Eventually the machine was never built and Torres Quevedo used its design as a seed to carry out a functional electromechanical  implementation. In his eassy, he faced the design of machine able to perform the operation ax(y-z)2 given input values for the variables. The machine had the same blocks of Babagge’s machine, but adapted to the electromechanic technology of early 20th century: arithmetic block (i.e. ALU), temporal storing block (i.e. registers) and read-only program (i.e. ROM) that allowed conditional branches.

After this intelectual effort, he built several prototypes and it is in 1920 when he presented in Paris the Arithmometer. This invention enabled writing the operation to be computed through a typewriter and the machine executed a program acording to the chosen operation. Inside, there was an only-read program that would control the arithmetic operators, the temporal memory, etc. In conclusion, a computer that was able to execute a program stored in a drum. In order to change the program it was necesary to build a new drum and insert it into the machine  [Hernando1991]. Quite close to punched card technology.

We must highlight that Torres Quevedo did not consider the use of massive storing memories (i.e. RAM), but only the storing of temporal values or final operations results – resembling the registers of a CPU. It is likely that the complexity of storing and addressing huge amounts of data was out of reach for the technology of the times.

In [Hernando1991] it is pointed out that the publication Essays on automatics (Ensayos sobre automática) is “one of the fundamental texts in the history of Informatics”. Hernando also prompts that Torres Quevedo brings out the importance of digital machines that allow controlling systems, while reacting to the environment conditions as well as to the very computed data. Clearly a visionary comment. Moreover, he proposes the creation of a specific study branch called Automatics. Had this been developed it would have been possible to research on several aspects of Electronics and Computer Science several decades before it actually happened. In addition, the inventor stresses that automata not only must focus on performing automatic mathematical calculations but they should also address any kind of problem, again foreseeing ideas that were developed several decades after by Turing, Von Neumann, etc. Hernando carried out this PhD Thesis on the work of Torres Quevedo and published on his blog a free copy of his book from 2000 about the same subject.

However, it seems that the impact of Torres Quevedo’s theories and inventions related to computing has been negligible, not affecting the course of Informatics due to the lack of difussion [Hernando1991]. Had his theories been spread, the history of Computing would have followed a different path, and the computer would have been created long before. The achivements of Leonardo Torres Quevedo are previous to those of Turing (who was born in 1912) and several decades previous to the computers of the 40s that set the foundations of modern Computing.

With this post, I simply tried to disseminate the relationship between Torres Quevedo and the history of Informatics, without being specific about the inner details of his inventions. I hope I have time to be able to analyze the designs of this awsome scientific and inventor so I can post about it in the future.

[Randell1982] “From Analytical Engine to Electronic Digital Computer: The Contributions of Ledgate, Torres, and Bush”, Brian Randell, Annals of the History of Computing, IEEE, 1982